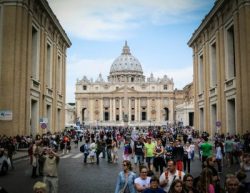 I’m certain most people reading this will recognize the name Samuel, particularly since we hear about him at Mass these days. It is in the Old Testament that we read about a woman – his mother – named Hannah, who was barren for many years until God eventually blessed her with a son. In gratitude to the Lord, she dedicates her boy, Samuel, to serve at the shrine of Shiloh under Eli the priest. One night, the young Samuel heard his name being called at a late hour. However, when the young one approached Eli three times, the latter responded the first and second time, “I did not call you, go back to sleep.” Then, the third time, he perceived clearly what was happening and instructed the young Samuel, “Go to sleep, and if you are called, reply, ‘Speak, LORD, for your servant is listening.’” (1 Sam 3:1-10)

Why would God call Samuel?

Certainly, many have wondered why God would elect to call someone like him at such a young age. This naturally leads to the question: “Who does God call?” I reflected upon this when I read the book Awakening Vocation, by Edward P. Hahnenberg. It examines the history of how vocation has been understood and challenges its readers to rethink vocation in light of a revitalized theology of grace. Indeed, God yearns to communicate Himself to all people. Therefore, He also invites all people to know, love, and serve Him.

As we saw with Samuel, a vocation is formed when God calls.

Indeed, His call is ultimately one that has as the primary goal the salvation and sanctification of souls. Nevertheless, when we consider the term vocation, we are reminded – as Hahnenberg stated in his book – that, “for centuries, Catholicism restricted the category of vocation to the priesthood and religious life.” Lay people were “those who were not clergy, those ‘who were not consecrated for the service of God.’” (Hahnenberg, 7) Holiness and evangelical action were seen as belonging only to the monks, to those consecrated to the religious life, and to the clergy. The lay faithful were viewed as people who lived in the world and only involved in worldly affairs, and they were viewed quite negatively. However, Vatican II emphasized that all Christians in every state of life are called to holiness, and now “three vocations stand out in postconciliar Catholic teaching as the paradigmatic way of living out the universal call to holiness: ordained ministry, consecrated life, and the lay life.” (41)

The biblical passage on the prophet Samuel is worth reading again and should lead us to reflect on vocation, calling, and lay life. God calls all people in different ways and for distinct purposes. The lay life should not be regarded simply as the absence of a call to the ordained ministry or to consecrated life. It is a personal and unique call from God to a particular individual for a specific task, mission or evangelical service. Truly, this divine call’s purpose is the salvation and sanctification of the layperson’s soul, and of those entrusted to him or her by Almighty God Himself.

In reflecting on this, I ask myself:

“How can the vocation of the laity be an effective way of leadership, activity, and holiness?” With the decrease in the number of people entering the ordained ministry, the Church needs well-prepared lay people to be effective leaders within their communities.

As lay people, we must realize that a layperson does not live out his or her vocation in passivity. He lives out his vocation more fully when he is active in heavenly things, but not necessarily when his activities are only of a temporal order. Therefore, being an active layperson (fulfilling one’s vocation) is not about being “allowed to marry, to till the earth, to pronounce judgement on men’s disputes and plead in court, to lay their offerings on the altar, to pay their tithes: and so they can be saved, if they do good and avoid evil.” (9) A layperson fulfills the vocation of lay life for the Kingdom of God when his activities are of a spiritual order and serve to respond to God’s call. However, these activities are inspired and initiated by God’s grace, oriented towards Him, and for the glory of the Blessed Trinity. This is the layperson’s way to holiness.

Certainly, all of this has a great significance to lay ministry. The laity’s primary vocation is the call to holiness. This universal vocation is to be lived out in union with the whole Church. Therefore, as lay people are becoming more prepared today than ever before for the work of evangelization, it is crucial that there be greater collaboration and unity between the ordained ministers, the consecrated ministers and the lay ministers of the Church. Prayer, psychological and socio-emotional maturity, along with a spiritual zeal for the salvation of souls are required to put aside any differences of opinions or personalities that can surface when various people are seeking the will of God through their ministries.

Though these three vocations are equally important, lay people have received within their calling the duty to submit to the discernment of the ordained ministers of the Church. However, this should not be an impediment to serving God. In the end, if each layperson goes to the room of his heart and upon listening to God’s voice says, as Samuel did, “Speak, Lord, for your servant is listening,” and then responds to God’s call by glorifying Him and doing His holy Will, all will be well. Indeed, holiness will be attainable.