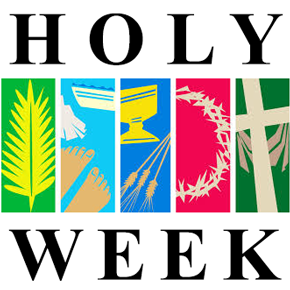 On Palm Sunday, the Catholic Church celebrates the day in which Christ, in order to generously fulfill the Will of God, solemnly entered Jerusalem where He would die for our salvation. With palms, we glorify and praise the King of Kings, who has come into this world in the form of a slave (1st reading: Flp 2, 6-11) to offer to humanity the greatest service possible: “give His life as a ransom for many.” (Mt 20:28)

Indeed, we must meditate more intensely on the great mystery of the passion and death of our Lord Jesus Christ, who, having full authority, chose to suffer everything for love of us and for our salvation. Therefore, it will be beneficial to do the following five things in the coming days:

1) On Holy Monday: consider whether or not our lives honor Jesus Christ, and ask Him for the grace to be able to live more for Him.

2) On Holy Tuesday: meditate on the times in which we, like Peter, have denied Christ, and how we need Him to give us the strength to be His true witnesses.

3) On Holy Wednesday: meditate on the times in which we, like Judas, have betrayed Jesus, and say to Him throughout the day, “Jesus, Son of God and Son of Mary, have pity on me.”

4) On Holy Thursday: spend at least an hour in spirit with Jesus in the Blessed Sacrament, who asks us, as He asked His disciples, “Could you not keep watch with Me for one hour? Watch and pray that you may not undergo the test.”

5) And on Holy Friday: participate, with great fervor and contrition, in the prayer of the Via Crucis.

These five resolutions will help us have a Holy Week. The following parable/story sums up well the significance of what we celebrate during Holy Week:

One late night, the younger brother came into the apartment, with his shirt and pants blood-stained. He was sweating, trembling, and nervously mumbling to himself. The older brother asked what happened, and the younger brother replied that he did not mean to kill anyone. As they were conversing, sirens began to sound, louder and louder by the second, and flashing lights became stronger and brighter, as the police surrounded the house. The younger brother nervously paced around the house, realizing that he was going to be arrested and eventually executed for his behavior.

…Now, you may or may not have heard a story similar to this before. I think about this story this week as we enter the most important week of the year: Holy Week. This is the week in which we meditate on Who our Savior is and What He has done and Will do for us.

These are some things we can reflect upon during this holy moment God gives us…
1) The older brother represents Jesus. The younger brother is each one of us.
2) What the older brother did for his younger brother is what Jesus did for you and for me.
3) What interpersonal relationships, situations, things (or lack of), or attitudes
have been destroying, or could ruin my ‘spiritual’ life?
4) What does my ‘older brother’ Jesus ask me to change?
5) Because He knows me and loves me, Jesus gave His life for me, to save me.
How can I show my gratitude to Him from now on?
6) Praise and thank Jesus who didn’t stay in the tomb, but rose from the dead
as He predicted, to give us new life and an eternal, heavenly home in His Name!

May God bless you and grant you a very Holy Week.